Gone through some transformation rite.

I’ve tried to write about it, vocalise it, somehow articulate it but I just haven’t had any words for this yet. I strongly feel though that now it’s the time that I’m gonna try or at least begin to try to open this process up. Little by little. So wish me luck.

I’ve danced since I was two, probably even earlier. Since that I didn’t stop until shitty things and life situations made me revalue my life completely. So I stopped. Quit. Went on strike. Looking back I feel that I could’ve done that even earlier but I’ve come to trust divine timing so I won’t should’ve/could’ve/would’ve anymore. The strike started couple of years ago and lasted for a while. Until last spring to be exact. Those who have ever suffered anxiety, trauma, depression etc. might get the gist what I mean with this revaluation but also I think all of us go through these rites in our lives where you need to stop and regather yourself even without traumatic events – situations where you need to decide all over what path to take and reconsider the choices you’ve made or are about to make. So maybe this also resonates with you, dear reader.  I’m not so interested on my past anymore (which is a good thing for a change) rather than what it made me realise and also release. I have to say though that I’ve recently found myself in place in my life where I can honestly say that I’m grateful for the struggle, even the horrific moments – I’m grateful for all the obstacles and suffering that made me come back to myself over and over again. Because that was all I had. That’s actually all we’ll ever have and that’s also the only relationship that truly matters but you already probably knew that. I didn’t. Now I do.

That also means the relationship with your body, your vessel of being, your spaceship, your temple, home and the only thing that you’ll actually own here in this life journey – this human experience. When shit happens in our life we might get disconnected from ourselves and also from our bodies. When we start to come back to ourselves the body will remember forever what happened. Even if we don’t. Even if we think that we’ve forgotten already. Our bodies carry everything that has ever happened to us in its memory. These couple of years has taught me that if I want to heal and learn from the struggle it also means I need to rewire my body and practice to release with concrete movement and self care methods (more about that in another blog post I promise) – every single day. So that’s where I began and it felt like learning to walk again.

Funny thing about relearning stuff – there is no space for new revelations to rise unless you make space for it. For me that happened only by releasing and by letting go. And it also meant to let go of something I’ve done since the dawn of days – I had to let go of dancing and me identifying as a professional of anything related to dance and/or dance field. I was in the process of  “heavy release” anyways so it happened kind of organically I think but never the less it was a huge deal – to let go of something that I’ve based almost my whole identity and also my income on. I’m by the way still in this “heavy release” process but I think now it’s more like a daily practice that I use and now it has become like movement and body practice among mental and spiritual one.

I needed that time off. I needed to have the feeling of every meaning, storyline, assumption and attribute to melt away. I needed to shed my skin. Over and over. It felt like peeling off layers. Getting too stuck with the build identity was toxic for me. Not only because of my past but mainly because it got me stuck in this old story that I felt I couldn’t relate to and that weren’t true for me anymore. To not do things that was connected to that storyline anymore I cut myself free from all the false and toxic meanings it had created. That release got me back my power to start from fresh, gave me the courage to look at my life from clear new perspective and start to rewrite my story from more honest place.

I want to point out that now that I’m trying to put my process in to words it might look like it was a neat forward going path but in reality it was pretty chaotic and super messy. It took a shit load of work, energy and time to get in to this point where I can at least somehow describe my journey. I’m still in the middle of it for sure and I know that life will always remain as a work-in-progress but I love that somehow in the middle of the mess it also starts to make sense somehow. On its own weird way.

Back to that “heavy release” process – I started to little by little invite movement back to my life. First it was mainly yoga and such, also a lot of singing and creating with voice (more music coming up btw!) and then after an year or so a bit of improvisation, intuitive and authentic movement practices. It still was a long way to get back in the “work mode” as a dance artist. I guess the main events in this progress was the realisations of me coming back to myself, the first times I felt I was having my own back and raising my voice to back myself up and the realisation of my fluid identity (body & gender). Like I said I’m still in the middle of the process but I strongly feel that it’s good for me as a human being but also as an artist to learn to open up again and to reconnect with outer world with my voice and also with my work. This writing is also a practice of that. So thank You for reading this and letting me share my process even though it’s still very undone.

That brings me to this day (kinda straight forward I know but I’ll go into details more in the future, little by little, baby steps u know). I’m currently working as a professional dancer in an upcoming performance “The Base of the Fire” which will premier in Turku, Finland 7th of April. I’m also moving back to Berlin to work more with movement and performance. So excited to continue my work with interdisciplinary ways. I just took part in this incredible workshop in Eden studios with Christine Bonansea and that was actually also my first audition ever. I was blown away about the level of sharing and inspiration that I got from the whole group. I always thought auditions as competitive and forced events but this was something totally else. It’s a magical thing when artists come together to share and when you cross paths with people who know how to create and hold space for you to rediscover your power and knowledge all over again! I’ve found that all these moments of connection have started to create a new self-reliance and spirit in me. New kind of fire is kindling in me and I can’t wait to see what it will throw on my way next.

Ok, so this was the beginning part of a practice of me learning to open up my process of being and working. I’ll leave you with these precious moments captured on film and wish you fulfilling weekend with your bodymindsoul! The story will continue soon. 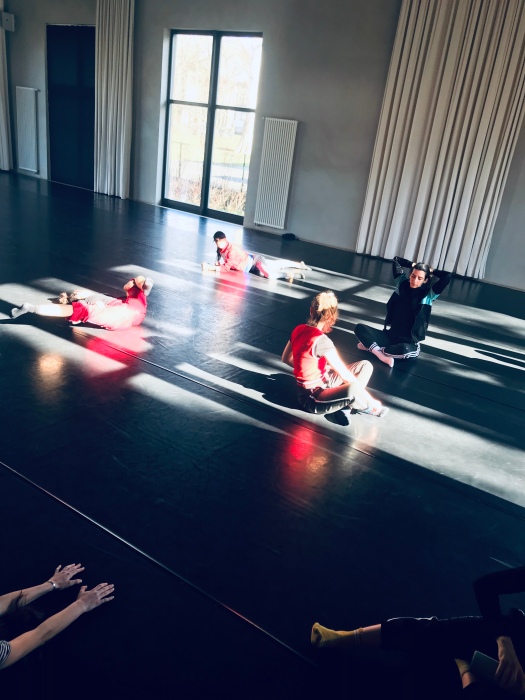